Communities of practice are “groups of people who share a concern, a set of problems, or a passion about a topic, and who deepen their knowledge and expertise in this area by interacting on an ongoing basis.”
Wenger, E., McDermott, R. & Snyder, W. (2002). Cultivating communities of practice. Boston: Harvard Business
School Press, p. 4.

If someone had mandated a group of people to create a website for the Social Integration teachers of the English community, I do not think it would have been as successful as the one put together by a small group of teachers in the first half of 2019. The website developed at the same time as their community of practice.

How did it start?

The Social Integration teachers community of practice started organically. It was a result of opportunity + need and the dedication of the teachers who found themselves in this equation.

During the second half of the 2018-2019 school year, a newly created position in the RECIT Adult Education Network made it possible for groups of teachers to get together to develop resources to share across the province.

Avi Spector, the consultant who filled this position, began to meet with teachers and consultants to talk about the kinds of resources they wanted to make. After reaching out to a few people in Social Integration, it quickly became apparent that they each felt somewhat isolated and that each of them were busy creating their own resources in their own corners of the province.

And so a handful of educators met and realized that, because they had each been building resources on their own, they already had a lot of them – what they really needed was a way to share them with each other as well as with new teachers to the program. They needed a network. It was from this collective need that their community of practice emerged.

Why did this community of practice work?

There were a number of key factors that contributed to the success of this community.

The group rallied together around shared needs. The structure of the group and the reason for the group was not imposed upon them – this was crucial! Instead, they had the time to figure out what they needed for and from each other.

This is where opportunity factored into the equation. They had the luxury of time to sit and talk with each other about what matters to them. “There is no power equal to a community discovering what it cares about… Conversation is the natural way we humans think together…” (Meg Wheatley in Turning to One Another, Simple Conversations to Restore Hope for the Future, pp.22 and 44.)

The group was made up of a mix of experienced Social Integration teachers and consultants up to one teacher who had just started teaching the program the same year. This mix prompted conversation about different needs depending on different contexts. This was a strength and it is one of the reasons why a website was chosen as their goal as it could answer to a variety of needs.

Once they realized that what they needed was a way to share their resources, they quickly chose to create a website. They decided on Google Sites as it is the easiest way to share materials that are dynamically updated – meaning that if a change is made to a source document, it is automatically updated on the site without the need to delete it and change it manually.

Other benefits of the Google Site

What can be improved upon?

This group was put together and began to work very quickly – they self-organized and developed the structure of their website and integrated much of the content between April and June 2019!

Though there was representation from different boards and centres, there wasn’t representation from all of them and that is something that can be improved upon. Taking the time to ensure that an invitation is extended to teachers from across the English community could bring even more diversity to the group, therefore ensuring greater access for everyone.

It is important to note that each of the current members chose to be part of the group on their own volition – no one was nominated to work in this group – and this would be essential for newcomers as well.

Managing when a Google Site collaborator leaves the group.

During the year, one of the group members had to leave for a period of time and when we wanted to change permissions on his documents, we couldn’t without him. Using a Google Site requires a keen understanding of how permissions work within Google Drive, so in the future I’d suggest a crash course on permissions if new members join the group.

This community of practice is a model for creating positive futures in education because it was made by and for its members along a common need. It’s success is attributed to Avi’s particular leadership style, which promoted a collective leadership amongst the group members.

Tracy Rosen wrote this article after meeting with the group on a number of occasions. The website was developed by Katie Cashion, Christine Dussault, Kim Grenier, Matthew Kennedy, Julian Verboonen, and Michael Werenchuk in the Spring of 2019, in partnership with Avi Spector, RECIT Provincial Service to Adult Education. 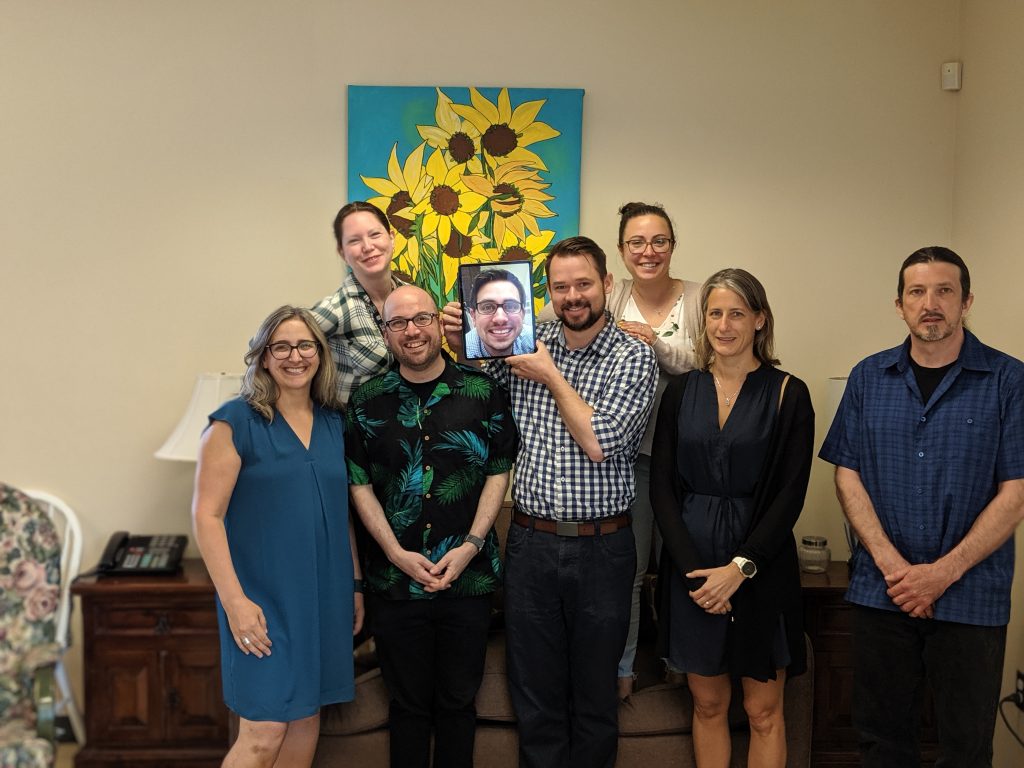 All materials are expected to be reused and shared according to this Creative Commons license, unless otherwise noted: CC BY-NC-SA 4.0

Share with your friends & colleagues (you can print to pdf to create a copy to read offline.)